Last minute of the war in Ukraine, live | The IAEA warns of a “very alarming” situation at the Zaporizhia nuclear power plant | International

Last minute of the war in Ukraine live The

Last minute of the war in Ukraine, live | The IAEA warns of a “very alarming” situation at the Zaporizhia nuclear power plant | International
is the headline of the news that the author of WTM News has collected this article. Stay tuned to WTM News to stay up to date with the latest news on this topic. We ask you to follow us on social networks. 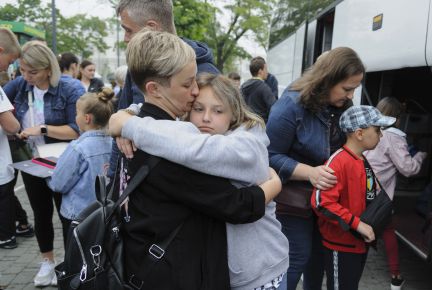 What has happened in the last hours

On the 170th day of the war initiated by Russia against Ukraine, these are the key data at 12:00 on this Friday, August 12:

The IAEA warns that the situation at the Zaporizhia plant has become “very alarming”. The director general of the International Atomic Energy Agency (IAEA), Rafael Grossi, warned this Thursday before the UN Security Council that the situation at the Zaporizhia nuclear power plant has become “very alarming”. “These military actions near such a large nuclear facility could have very serious consequences,” Grossi said, emphasizing that the IAEA has been “in frequent contact” with both Ukraine and Russia to ensure that it has the “clearest possible picture of the evolution”. Giving a general description of the events that occurred at the plant at a meeting of the Security Council called by Russia, the director of the IAEA has detailed that the Zaporizhia nuclear power plant has been the object of bombardments that have caused several explosions near the electrical panel of the plant, causing a power outage.

WHO verifies 445 attacks on health facilities in Ukraine. The World Health Organization (WHO) has verified 445 attacks in Ukraine on healthcare, resulting in 105 injuries and 86 deaths, with a new attack in the last two weeks, since the start of the war (February 24) as of August 11, according to the WHO Health Care Attack Surveillance System. As the WHO explains in its report, published this Thursday, attacks on health care include those perpetrated against health centers, transport, staff, patients, supplies and warehouses.

Two ships set sail from Ukraine loaded with 63,000 tons of grain. Two ships have set sail this Friday from Ukraine loaded with grain, as reported by the Turkish Defense Minister, which raises the number of ships that have transported grain to 14 since Russia and Ukraine agreed to unblock the export. The ship Sormovsky, with the flag of Belize, transports 3,050 tons of wheat and the ship Star Laura, with the flag of the Marshall Islands, has sailed from Pivdennyi to Iran with 60,000 tons of corn.

Zelensky: “Only the total withdrawal of the Russians [de Zaporiyia] would guarantee nuclear security for the whole of Europe”. Ukrainian President Volodymyr Zelensky has called on the international community to “react immediately” to expel Russian troops from the occupied Zaporizhia nuclear power plant, which has been the target of several bombings since last weekend. “The whole world must react immediately to expel the occupants of the power plant”, the largest in Europe, located in southern Ukraine and occupied by Russian forces since March 4. “Only the total withdrawal of the Russians would guarantee nuclear security for all of Europe,” the Ukrainian president said in his daily video address.

Ukrainian children say goodbye to their families in Lviv before traveling to France for the holidays. The image is by Mikola Tis (Efe).

The writer Salman Rushdie, stabbed in the neck while giving a conference in New York | International

The writer Salman Rushdie, stabbed in the neck while giving a conference in New York | International