As promised, Capcom today presented news of sun breakthe first major expansion of monster hunter rise. Not only has it shown a new trailer and information on this content, but it has also announced when it will be released: June 30th to Nintendo Switch and PC, platforms in which it is already available to reserve at a price of 39.99 in Spain. Those who pre-purchase will receive the layered armor Faithful dog for Canyne and layered armor striped cat for comrade, add-ons that only affect the appearance of the characters.

There will also be a special version that includes both the base game and the expansion. sun break, a pack that on Steam is priced at 54.98 (although at this time it can be purchased at a discount) and that on Nintendo Switch will also be released in physical format. This edition deluxe also have additional content such as overlapping armor sets, gestures and hairstyles for our character. 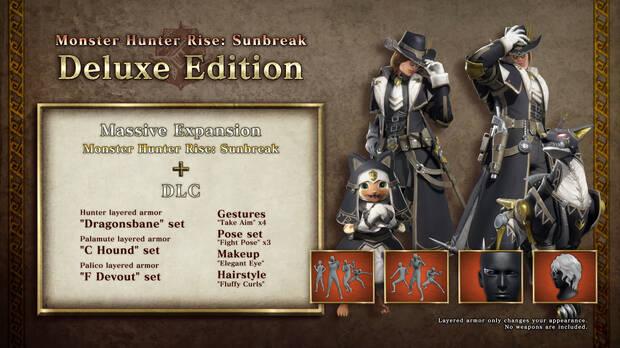 sun break includes a completely new story, with new monsters, new combat elements and difficult missions Master Rank, among other news. The plot of this expansion is set just after the heroic defense of Kamura village against the Frenzy with which it concludes monster hunter risea battle that inspires members of a new region to ask for help.

In addition to its release information, Capcom has also released a trailer in which we can see the first look at the new story, the new central area in the Elgado outpost, the challengers new monsters, and the exciting new abilities that hunters will be able to find after completing the base game story. You can watch the trailer below:

If we dare to travel to Elgado’s outpost, we will have to face the threat of creatures known as The Three Lords: Garangolm, the creepy wyvern fanged Lunagaron, and the elder dragon Malzeno, although they will not be the only creatures we will have to face; We will also meet new variations of monsters, as well as the return of familiar monsters such as the Bishaten Sanguina and the mighty Astalos.

monster hunter rise It is available on Nintendo Switch and PC. You can read our review here and take a look at our guide here.

10 series projects based on video games

10 series projects based on video games