Georgina Amoros and Aron Piper present us with Emperor Code

The Spanish thriller returns to cinemas with ‘Emperor Code, a film directed by Jorge Coira and starring Luis Tosar who opens this Friday, March 18. We have been able to chat with several of its protagonists, including Georgina Amorós and Arón Piper, the stars of ‘Elite’ who have experienced their first reunion after the series in this production about corruption and the sewers of power.

In addition to presenting us this latest work in ‘Emperor Code’, the two interpreters of the Netflix series They stopped to analyze the prejudices that being great teen stars can bring. in order to get more serious and adult roles in the future. On the other hand, Arón Piper, who has already left ‘Elite’ behind after its fourth season, gave us an overview of this last year of his career, for which he feels happy for the many opportunities that the success of the character of Ánder has opened up for him.

Georgina Amorós, due to the fact that ‘Emperor Code’ has strong female characters who, when it comes to taking action, are left aside in order to give more prominence to men, also entered to examine the inequality that still exists in the sector in terms of representation quotas. However, Arón Piper also clarifies the intention of this film to reoffend in that unjust society in which it makes sense to reflect this gender inequality. 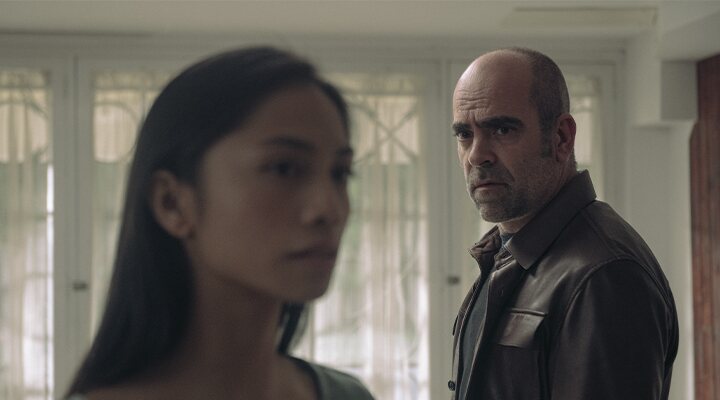 Along with them was also Denis Gómez, another of the actors of ‘Emperor Code’ who plays a politician in the spotlight. Taking advantage of the layers that his plot hides in the film, the actor began to talk about the virtues of political thrillers, the point of difference that this story of the sewers of power marks with respect to other similar films and the keys behind the preparation of dark characters in this genre that is so popular in Spanish cinema.

This makes the difference with other thrillers

Finally, we also chat with the director Jorge Coira and with Alexandra Masangkay and María Botto. All of them they told us about the motivations that led them to ‘Emperor Code’, while Coira broke down his work behind the cameras and how he has tried to make a difference with other thrillers. In addition, Masangkay, who years ago began a career in music as a contestant on ‘Operación Triunfo’ in 2011, went on to talk about the stability in the film industry compared to the music industry.

this is DeepWell, the union between games and medicine